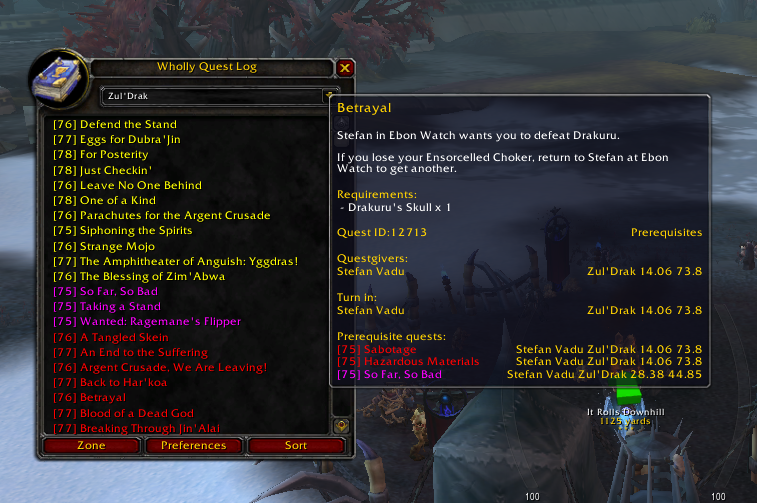 Changes the comparisons to completed quests to be more mathematically robust. Corrects a problem where cleaning the database can cause a LUA error.

Version Corrects the internal checking of reputation gains to not include modifications when the reputation is lost. Adds the verifynpcs slash command option.

Updates some localizations, primarily Portuguese and Korean. Corrects the problem where quests with breadcrumbs were being marked as not complete after a reload.

Adds the ability to have quests have items or lack of items as prerequisites. Adds support for ODC: quest codes, which are used to mark other quests complete when a quest is turned in.

Adds the ability to have quests use the abandoned state of quests as prerequisites. Version Corrects a problem that manifests itself when running the ElvUI addon.

Updates some localizations, primarily Portuguese, Korean and Simplified Chinese. Corrects the problem where some daily quests that also have another aspect e.

Updates the automatic quest level verification system to ensure quests that are considered to have a dynamic level actually do. Adds basic structural support for the Italian localization.

Updates some Portuguese localizations. Makes the system than checks for reputation gains a little more accurate.

Records actual quest completion for those quests that Blizzard marks complete with others in the server, so clients can know really which quest was done.

Implements a way to know when Blizzard uses internal marking mechanics which differ from flag quests to specify when quests are available.

Adds an architecture to support information about quests that are bugged. Archived Files File Name.

A Frostmaul Preserver. This error is being reported by a few others as well. I have not been able to reproduce it, but am adding some guard code to try to ensure it does not cause problems.

Premium Member. I had to reinstall my entire machine over the weekend RIP disk drive and after pulling all my addons down again, I'm getting this error.

I'll note that I haven't removed all the extraneous addon folders this time, I've just disabled them.

I've got enogh addons that my loading screens take a while. I admit I don't know much about how addons load, but removing the extraneous stuff is easy enough for me, and can only help.

Anything I can do to help and yes, I'm trying to figure out which addons I don't really use, and which I only uses pieces of and might do without or find something else that combines what I do use is useful.

You can remove the folders you do not need, but as long as you do not mind the as things go low disk space used, and list of addons in the UI I would suggest not doing so.

However, the Classic version does not have all the quest information present yet. Submissions from your play in Classic would be appreciated.

You can also get the very latest versions from GitHub. Where is it? Putting grail classic into search here doesn't find anything.

Grizzly UK. A Black Drake. Originally Posted by Grizzly UK. I tried Grail Classic when Classic launched but all the quest givers were named "Unknown" and I could not interact with any of them.

Only quest givers were affected, vendors, trainers, etc all worked normally. This was in the Night Elves starting zone Shadowglen.

No idea as to what the actual problem is but figured I should report it so it can be investigated and hopefully fixed.

Apologies for not reporting this sooner but I got a little distracted playing Classic! Originally Posted by Meloric. Yes, they work with a few limitations to the Wholly quest panel that are being worked on.

However, as you have seen, the quest data is limited. For Classic all the quest data needs to be gathered because I have found that the Retail data does not match and I feel it is better to gather the data fresh instead of making people go places where quests are not.

Please send your Grail. It was my understanding that they"should" work with the classic client with the changes you have been making to get them to work on both clients.

Is my "thinking" incorrect? I'm currently using the version but when I open the Wholly panel, it is showing only quests in the starter level areas.

This was in the Coldridge Valley area. Entering into the next area or selecting some other area does not show any quests.

I have tried with only installing the classic files and also installing all the files, but still does not show other quests in the Wholly page.

Any ideas or will Grail get caught up as I quest in other areas? Last edited by Meloric : at PM.

Originally Posted by Nimhfree Yes, they work with a few limitations to the Wholly quest panel that are being worked on. Send a private message to Meloric.

Send email to Meloric. Add Meloric to Your Buddy List. Originally Posted by Meloric It was my understanding that they"should" work with the classic client with the changes you have been making to get them to work on both clients.

Once more, into the chat errors! Sort comments by Newest. Why early matters Survival rates are higher when cancer is diagnosed at earlier stages.

We are supporting the development of our products with population-scale clinical studies. And who put it there, anyway?

Literally How to use a word that literally drives some people nuts. Is Singular 'They' a Better Choice?

Can you spell these 10 commonly misspelled words? The dictionary has been scrambled—can you put it back together? Login or Register. Save Word.

Selbst verkaufen. All items are in stock and are dispatched to you within 24 hours of your payment being received. Rechtliche Informationen des Verkäufers. Mehr erfahren. Saison 4 von Battle for Azeroth beginnt. Untereinander kommunizieren sie in französischer Sprache.